Start with Why: How Great Leaders Inspire Everyone to Take Action by Simon Sinek
My rating: 4 of 5 stars

The book presents the Why, What, How model and how this applies to businesses. Businesses where the products that they produce and how they produce them echo the why the company exists have a much clearer and easier to understand message for customers and employees to understand and to be passionate about. The book presents an easy way to imagine this which he terms the celery test.

The Celery Test – the example presented is if you go to the supermarket and have celery, rice milk, Oreos and M&Ms in your basket if someone looks at this they would have no idea why you are buying them. If your why was to be healthy then you would only buy the celery and rice milk. Now imagine that these different items are products or ideas, if you have lots of different products but they don’t follow your why then people will have no idea why you are making all of these products where as if you start with why and if everything reinforces your why then it is extremely clear to people what your companies Why is.

There were a number of interesting stories in the book talking about people such as Steve Jobs and Apples why of revolutionising through technology, Martin Luther King and his I have a dream not I have a plan speech, and more.

One thing which was really interested was how commodity products only differentiate each other on the smallest of additional features. People are not passionate about companies which produce commodity products, they buy them purely on a comparison basis next to another product. This is a fine bussiness but it will never be an amazing business.

The most interesting thing for me was why bussiness succession often fails. If you think about Bill Gates stepping down and Steve Ballmer taking over, Bill is strongly a why person but he needs what and how people around him to succeed. Steve appeared to be a natural successor, knowing the bussiness inside and out but Steve was not a Why person, he was a what and how person and as such when he took over he was not someone who was able to take on the role Bill provided at Microsoft – the why the company existed and its motivation for the future.

View all my reviews

There has been talk about increasing the frequency of the Watford and St Albans Abbey trains from their current frequency of every 43 to 60 minutes to every half an hour.  Hertfordshire County Council did an investigation into the costs of installing the frequency to every 30 minutes however the proposal estimates the cost to be around £15-35m.  However there is a way that we could get close to the same performance without any expenditure on a passing loop.

It would be possible to increase the frequency of the trains from Watford to St Albans, and back again, to ever 30 minutes with no infrastructure investment if we make one assumption – that people are happy to get off the train and back on another train – bare with me….

Using the existing train timetable to use for the time between each station.  The vast majority of these times are the same all day – the only exceptions being that sometimes trains wait for 5 or 6 minutes at St Albans Abbey before returning and the trains at Watford Junction wait between 6 and 23 minutes before leaving.  To make the math simple I will assume that we wait 6 minutes at both St Albans and Watford Junction stations.

The Hertfordshire County Council proposal was to put a passing loop at Bricket Wood which is 8 minutes from both Watford Junction and from St Albans Abbey.  In this example instead of their being a passing loop one of the trains, we will call Train A, will arrive at Bricket Wood before the other train, Train B – Train A it will terminate at Bricket Wood station after everyone has disembarked.  It will then pull out of the station before Train B arrives, Train B will also terminate at Bricket Wood but will immediately pick up passengers to take them in the reverse direction.  Once Train B has departed Train A will return to collect the passengers looking to complete the remainder of the journey.

The following diagram shows an example with Train A being shown in red and Train B being shown in green.  It should be noted that Train A and Train B will alternate each time because of the train leaving from Bricket Wood earlier the previous time. 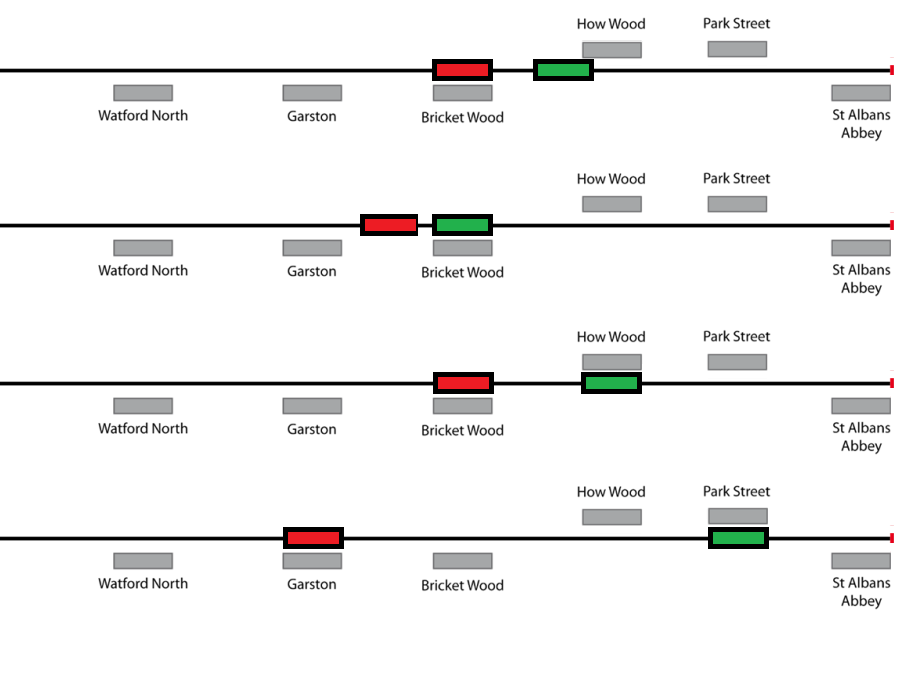 To be able to turn around a train at Bricket Wood, get it out of the station so the other train can come in then turn the train around again to turn it around a third time there are two variables.  Firstly how long it takes for the train crew to swap over and secondly how long it takes the train to move away from the platform.  To keep things simple we will assume that we can move the train out of the station in 1 minute and back in in 1 minute as well. 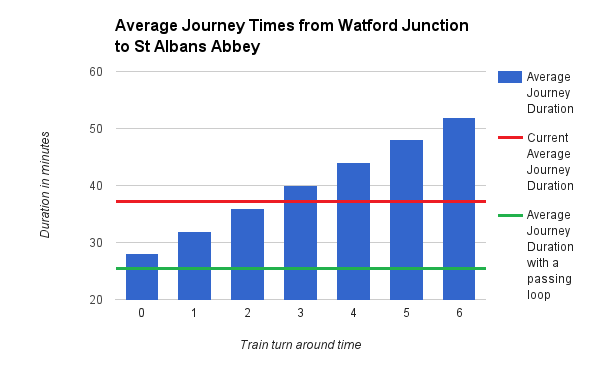 Here we can see if the train turn around time exceeds two minutes then the average journey duration is no better than it is currently of 37 minutes.  If it were possible for the train driver to turn the train around instantly (perhaps because he can drive the train backwards) then the average journey time drops to 28 minutes – which is not far from the 26 minutes which would be achievable if there was a passing loop all without the required £15-35m just with an extra train and passengers happy to briefly get off the train at Bricket Wood – perhaps someone selling coffee on the platform would make them suitably happy for the minor inconvenience.

To highlight, I don’t think this is an end solution to the problem but it might be a good next step so we can increase the frequency of the trains with no major costs and then at a later stage a passing loop could be installed to allow the trains to run directly through and thus removing the swapping over half way.