We have been pulling together the details for a crowd funding campaign to help fund a study to show what the impact of a passing loop on the Abbey Line.  I have set up the crowd funding campaign on SpaceHive and popped together a promotional video.  Having spoke to local councillors we already have support for £1.5k from them as well as a number of private donations so hopefully we will make it to the required £6k by our deadline of the end of the year.

From Watford Junction to St Albans Abbey there are six stops (St Albans Abbey, Park Street, How Wood, Bricket Wood, Garston, Watford North & Watford Junction).  The sum of the distances between these stations totals 10.1 km.  I looked at all of the London Midland network and identified the following routes with the same number of stops and a similar distance and compared their price of a single off peak ticket.

One thing to note is that Lidlington to Bletchley is on the Bletchley to Bedford branch line which makes it very similar to the Abbey line – so why is it so much cheaper even though the distance is further?

One final note is that Watford Junction to St Albans Abbey is about the same distance as Wembley Central Rail Station to London Euston Rail Station (which is 11.6 km) and on Oyster this journey costs £2.80 off peak.

Back in July 2016 I was proud to highlight the issue of living medical donations from people while working, see the previous post.

The result from this was 2,292 signatures on the government petition
“Living medical donors (e.g. kidney) should be eligible for statutory sick pay” and in addition to this Louise Haigh MP for Sheffield, Heeley raised a Ten Minute Rule Motion for Organ Donors (Leave) which today was read in the House of Commons.

The speech highlighted the amazing work which is going in to promoting donations after death but with donor levels so low we should do everything we can to support living donors.

We are already chronically short of donors and we should be breaking down every conceivable barrier put in the way of these potential life savers.  Recovery time can often be long for living organ donors and they should be able to concentrate on getting back to normal, not rush back to work because they are unable to afford the time off or fearful that their job may be at risk.

Young people, in particular, will be fearful that if they take as much as the recommended 12 weeks off work, they may be disadvantaged and this will put off many of the most healthy from becoming a living organ donor. My Bill will send a clear signal that if you are prepared to give an organ to save a life, the law will back you up every step of the way.

You can find the full text here.  Following unanimous support the bill will go to a second reading on 20th January. 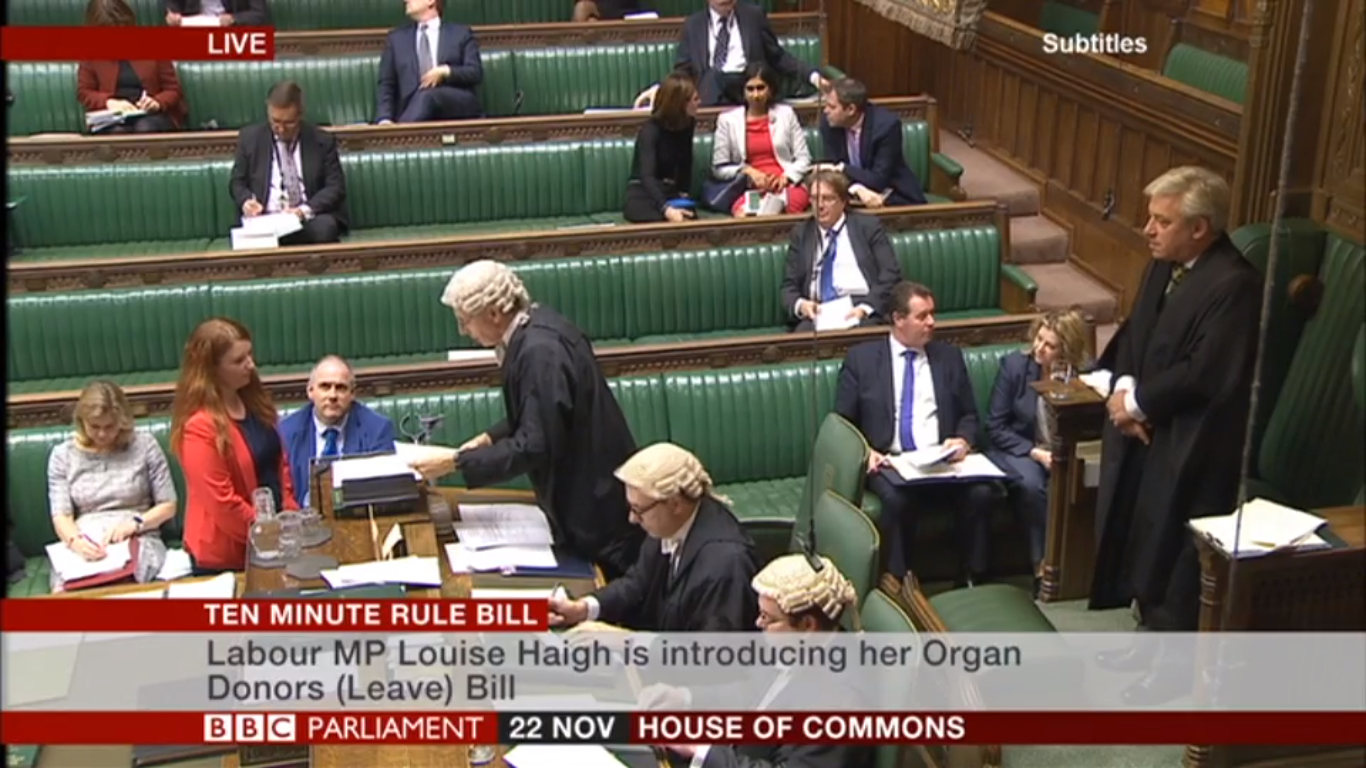 This post is related to my motivation for raising a petition with the UK Government – the petition can be found here.

The issue of organ donation is of vital importance. With 7,000 people currently waiting for a donation and the number of donors falling, we should be doing everything possible to encourage donations.  Despite five years of progress and a 50% increase in the number of deceased organ donors since 2008, the UK still faces a shortage of donated organs and people waiting for a transplant are still dying due to lack of available donors – the NHS put this number at about 1,000 people per year, around 1 in 7 of the people waiting for a donation.

When donors make a living donation many employers see this as an employee optionally making themselves ill, and as such the individual is required to take any time off from their holiday entitlement or take time off unpaid.  This seems fundamentally wrong for the danger they are putting themselves in to save the life of another person, someone they might not even know.

Living donor transplantation is an established practice in the UK and represents currently 25% of overall organ transplant activity.  However with employees getting little support it is no wonder that the actual number of living donations has been decreasing over the last two years.

Having seen first hand both the impact a bone marrow donation can have on the recipient, going from being extremely ill to being healthier and happier than they were in a long time.  I have also seen the pressures an anonymous donor gets from his employer while giving bone marrow and I feel disgusted that the active living anonymous donor can be treated so poorly.  As a minimum the employee should be treated equally as if the employee had become ill themselves, as such they should be entitled to statutory sick pay and an employee should be required to provide them with their standard sickness benefits.  Ideally an employer should provide any other support they need to be able to give their donation, such as time and flexibility for blood tests etc.

Anyone who is brave enough to step up and volunteer to save the life of a complete stranger and putting their own lives at risk should be given all the support they need, not penalised for doing so.