With the government procrastinating to make any decision after the publication of the Airports Commission: Final Report it seems that there is no apatite for airport expansion by the government.  This is an important issue as highlighted in the report.

At the end of this extensive work programme our conclusions are clear and unanimous. While London remains a well-connected city its airports are showing unambiguous signs of strain. Heathrow is operating at capacity, and Gatwick is quickly approaching the same point. There is still spare capacity elsewhere in the South East for point-to-point and especially low-cost flights, but with no availability at its main hub airport London is beginning to find that new routes to important long-haul destinations are set up elsewhere in Europe rather than in the UK. Other UK airports are increasingly squeezed out of Heathrow, with passengers from the nations and regions obliged to transfer through other European airports, or Middle Eastern hubs. That costs them time and money, and is offputting to inward investors. Without action soon the position will continue to deteriorate, and the entire London system will be full by 2040.

There is, however, an option which the report did not consider – instead of building a new runway why don’t we better connect the ones we have?

A high speed train line linking Gatwick, Heathrow, Luton, Stansted and Southend such that passengers could land at Gatwick and catch a connecting flight from Stansted.  This sounds expensive, but in reality an elevated train line could run most of the route above the M23 and M25 and costs could be further reduces by utilising existing train services from Redhill (to get to Gatwick), St Albans (to get to Luton), Cheshunt (to get to Stansted) and Brentwood (to get to Southend Airport) – though there are some benefits of an airport express service connecting all (or some) of the airports.

The advantage of the airports being connected is that baggage could be transported between airports as well meaning that people would not need to collect their baggage for a connecting flight from a different airport – similar to the Hong Kong system where you can check in in the center of Hong Kong or at Kowloon Station and your baggage is then transported for you to the airport.  In the utopian version of this idea you could go to your closest airport and check in for your flight then take the train round to your actual departing airport, as such each airport now becomes like a terminal to each other – though the take up of this would be airline dependent.  This also has the possibility to transport freight between terminals as well, so that cargo arriving at one airport could easily leave through another.

There are two additional connections which add a very small detour which each add an extra airport.  Woking and Watford.  From Woking you can get to Southampton Airport and from Watford to Birmingham Airport, both Woking to Southampton Airport and Watford Junction to Birmingham International are less than an hours journey.  As well as allowing quick connections for people traveling to Manchester arriving into a London airport via Watford.

A high speed train in the UK can travel at 186mph, if we have the line follow the M23 and M5 it would be, theoretically possible, to get from Gatwick to Heathrow in about 13 minutes, to Luton in about 25 minutes, to Stansted in about 35 minutes and to Southend Airport in about 37 minutes.  So this would link together 7 runways within 40 min and 9 within 1 hour and 20 minutes.  These numbers are overly optimistic, since they do not allow time for people to change trains but with clever scheduling of services that would not add too much time to the journey.

By running the line above the existing motorways it means that we don’t need to buy any more land, we already occupy it.  The technology of elevated trains is nothing new. though based on other elevated trains it might be wise to employ some created architects to make it look amazing!! And much more like… 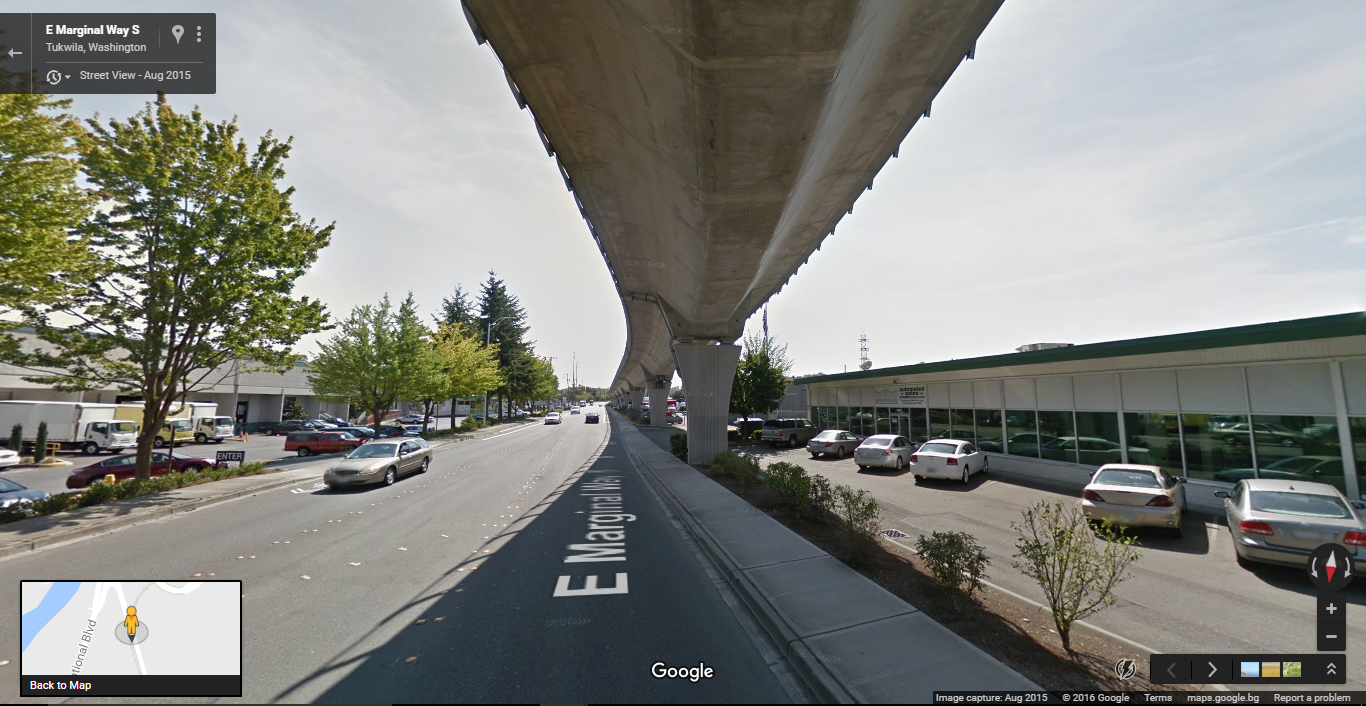 As an example there are 45 flights from London airports to Edinburgh on a Monday (randomly chosen day as an example).  12 of these fly from Heathrow and 8 from Gatwick.  If Heathrow and Gatwick were both better connected would all of these flights be needed?  I doubt it.  (The sad fact that flying to Edinburgh is usually cheaper than taking the train I will not dwell on, on this occasion).

Another environmental improvement would be that if you could check in and drop your bags at your closest airport.  For those people who drive they will not have to drive so far and hopefully not at all by using other public transport.

It might seem a bit odd to be concerned about the environment when talking about air travel, surely this is a juxtaposition.  If a journey has to take place flying in a modern plane is as efficient as taking a very small car for the same journey – but things are moving fast in this area with airplane manufacturers  currently working towards fully electric flight.  As such in the future flying could be powered from renewable energy.

Anyway, lets go back to the train line… If we take this idea one step further and instead of just a single high speed line in each direction we also run a slower stopping line we would be able to provide a way for people to use this on a regular commuting basis – many people already commute using the M25 but they need to have a car as there is no viable train alternative.

Additionally another advantage would be to reduce the number of people who have to travel through the crowded central London network.  This will ease pressure on existing terminus stations and the connecting underground links which are already under strain.

As an example, people traveling from Oxford to Cambridge currently have to change from Paddington to Kings Cross via the underground. 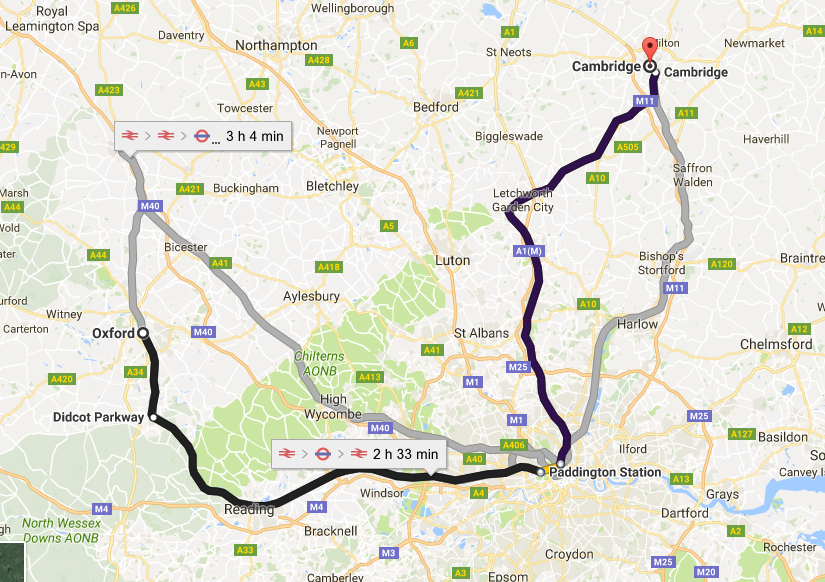 If we include Gerrards Cross and Potters Bar then this line would connect the vast amount of train lines which leave London.

The elephant in the room is that expanding an airport is using private money and building railways is using public money.  Although the costs of an elevated train on already owned land will be cheaper than tunneling a train the costs of which are still likely to be substantial.  Additionally for the service to be as short as possible some of the selected stations do not have sufficient capacity so they will either need to be expanded or new stations build elsewhere allowing customers to transfer between lines.

This post is just to get people thinking, it might be viable or it might not but I do feel that the number of advantages show that this is an idea which should be discussed further.